BlackSheep catches any unhandled exception that happens during the execution of request handlers, producing a HTTP 500 Internal Server Error response. To see this in practice, start an application like the following:

And observe how a request to its root produces a response with HTTP status 500, and the text "Internal server error".

Exception details are hidden to the client by default: it would be a security issue if the web application returned error details to the client. However, while developing and occasionally while investigating issues, it is useful to be able to obtain error details directly from the web requests that are failing. To enable error details, update the app declaration as follows:

Now the application returns the details of the exception with the full stack trace, serving a page like the following: 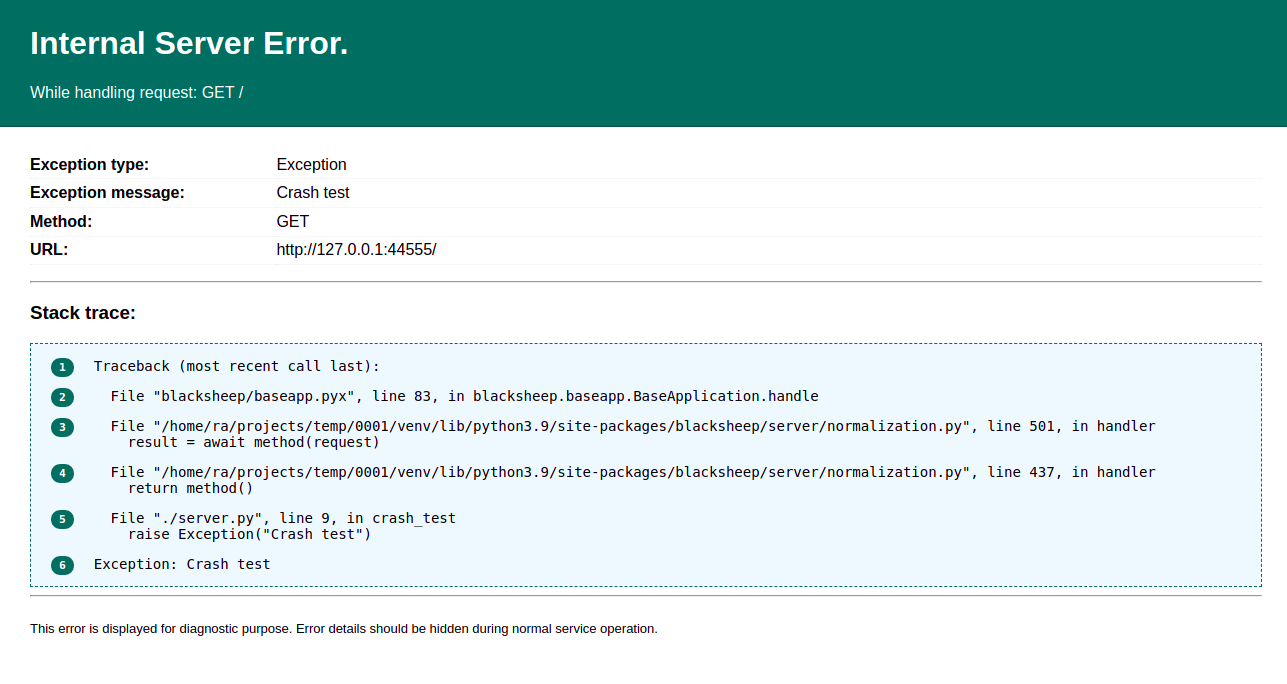 Consider using environmental variables to handle this kind of settings that can vary across environments. For example:

BlackSheep project templates use a library to handle application settings and configuration roots. Consider using essentials-configuration for this.

The BlackSheep Application object has a exception_handlers dictionary that defines how errors should be handled. When an exception happens while handling a web request and reaches the application, the application checks if there is a matching handler for that kind of exception. An exception handler is defined as a function with the following signature:

In the exception below

It is also possible to register exception handlers using decorators, instead of interacting with app.exceptions_handlers dictionary:

This event should be used to configure things such as new request handlers, and service registered in app.services, such as database connection pools, HTTP client sessions.

This event should be used to configure things that must happen after request handlers are normalized. At this point, the application router contains information about actual routes handled by the web application, and routes can be inspected. For example, the built-in generation of OpenAPI Documentation generates the API specification file at this point.

This event should be used to fire callbacks that need to happen when the application is stopped. For example, disposing of services that require disposal, such as database connection pools, HTTP client sessions using connection pools.

Refer to the following diagram to know more about when application events are fired, and the state of the application when they are executed.

How to register event handlers¶

In alternative to decorators, event handlers can be registered using +=:

For example, to define an after_start callback that logs all routes registered in the application router:

Read about the details of routing in BlackSheep.